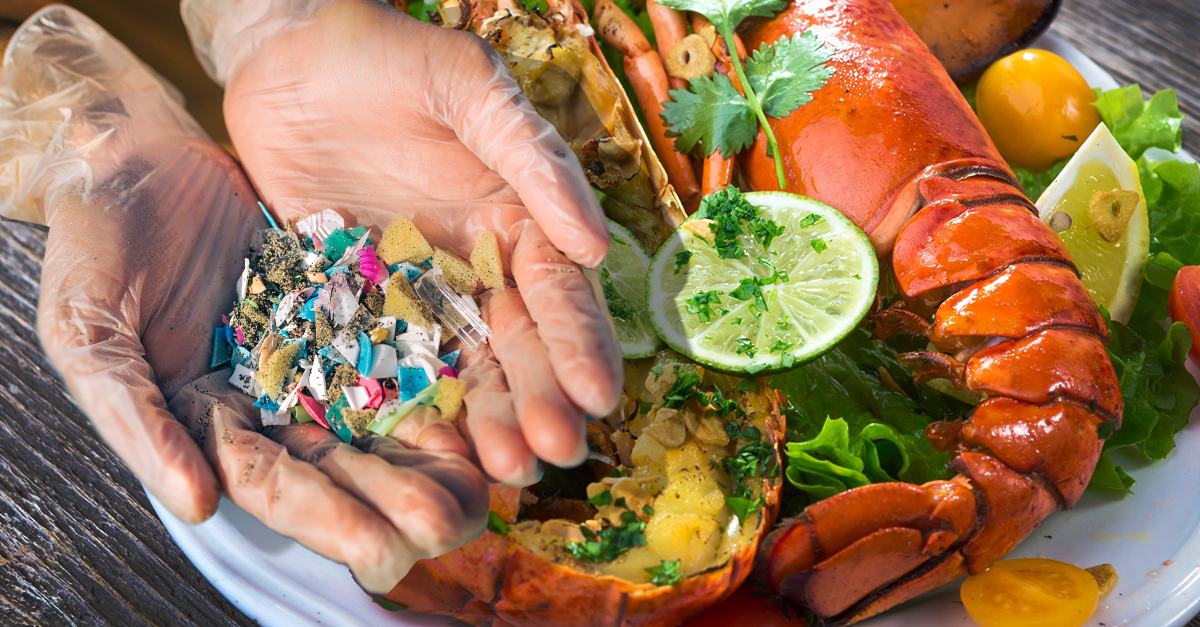 “Are you listening? One word — plastics,” says a family acquaintance to the young Dustin Hoffman in the 1967 classic film, The Graduate. “There is a great future in plastics.”

A half century after that prophetic statement, scientists and environmentalists are making another profound statement, only this time it is more ominous in nature. In the relatively short period of some 50 years, plastics have indeed conquered the world. In fact, we are literally drowning in organic polymers that come in forms no one ever dreamed of back in 1967. From packaging, bags, and fibers in synthetic clothing to water bottles, cosmetics, and even to toothpaste, plastics and micoplastics are everywhere and in everything… including our own bodies.1

The Trouble With Plastics

According to The United Nations Environmental Program, which coordinates the UN’s environmental activities, plastic can now be found in abundance across the world’s oceans and even on the seabed of the North Pole. There is so much plastic in the water, it is hard to even fathom the actual amount without some comparisons. Just saying there are an estimated 5 trillion pieces of plastic totaling more than 8 million metric tons of the stuff currently floating around the planet is bad enough2 Now visualize how much more plastic we are adding to our waterways on a daily basis. Hard to do? Try this. Think about a truck load of plastics, from tires to micobeads, being dumped into the ocean every minute of every day. It is not a pretty picture. But if we do not take preventative measures soon, a new UN study warns that the amount of plastic being added to the world’s waterways will grow to 4 truckloads a minute by 2050… and that could spell disaster.3

A trip to your nearest waterway tells the real story. In Scotland, for example, a recent study of the famed River Spey found that at least 1 in 6 fish tested was contaminated with microplastics. It is the same story in Canada, the U.S., UK, EU, and just about everywhere else around the world where researchers have tested the waters.4

Where do these microplastics originate? According to the National Oceanic and Atmospheric Administration, most microplastics enter into our waterways from several sources, including intentional dumping and improper waste management to storm water runoff. These sources often include plastic microbeads found in cosmetics and personal care products as “cleaning agents” , industrial scrubbers, and resin pellets used in manufacturing. Larger plastics that find their way into water range from household products and construction materials to commercial fishing gear. All of it eventually degrades due to the environment into smaller pieces, but these microplastics do not go away, they just get smaller-and more ingestible-for marine life and birds.5

The pollution is bad enough. But we now know that birds, fish, and shellfish are digesting plastic. Some of it is trapped in their digestive systems, causing illness and even death.6 Even more troubling is that microplastics, tiny particles derived from synthetic and semi-synthetic organic compounds, are finding their way to our dinner tables by the billions. Researchers at the University of Ghent in Belgium estimate that Europeans are consuming as many as 11,000 microbeads a year through seafood. While most pass through our digestive systems, some do not and tend to accumulate, says Dr. Colin Janssen, who led the study.”We do need to know the fate of the plastics. Are they encapsulated in tissue or are they causing harm? Are chemicals leaching out of these plastics and then causing toxicity? We don’t know and actually we do need to know,” he says.7

One reason for concern is that microbeads can attract persistent organic pollutants (POPs) and other toxins in seawater and then pass those poisons on up the food chain via plankton or zebra mussels to fish, shrimp, clams, then on to humans. Large doses of polyethylene in rats, for example, are known to cause cancer while oral intake of the world’s most common plastic can also cause liver and kidney disease.8

Many health officials and legislators are already taking action to ban the use of microbeads in commercial products around the globe, including the U.S., which outlawed their use in July 2017. Why the focus on microbeads?

A U.S. study of the Great Lakes found that 80% of the plastic found was less than a millimeter in size, and their uniform shape pointed to the “scrubbers” used in personal care products, such as soaps, cosmetics, and toothpaste. In addition, other types of plastics degrade in water to add to the microplastic problem. Sometimes these particles are so tiny they flow right through filtration systems and can, in some instances, breach the tissue barrier to enter the blood stream and vital organs of humans. 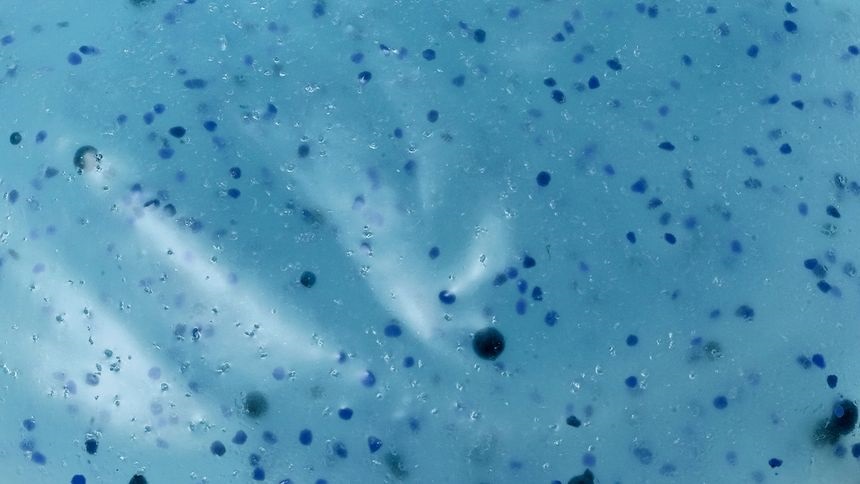 Ian Robertson is a materials characterization scientist at PerkinElmer. A leading authority on plastics identification, Robertson says that microbeads constitute about 10% of a product’s volume. Because of their microscopic size identifying each piece of plastic in our food and water can be challenging. “Each of the microbead plastics has its own unique signature that requires positive identification so that it can be handled appropriately,” Robertson notes, adding that the principal analytical technique for identifying polymers and additives is infrared (IR) spectroscopy.

Since introducing the first IR spectrometer in 1944 and the first IR microscope in 1954, PerkinElmer has become the global leader in IR technology. The company offers a family of advanced instruments from the Spotlight+ 200i and 400 IR imaging systems to the portable, fast, and easy-to-use Spectrum Two™ IR imaging system. Outfitted with ready-made protocols, a materials library, and the unique Spectrum Touch™ software, these are the instruments of choice among researchers involved in the identification and quantification of synthetic polymer microbeads as well as for analyzing other compounds in water that range in size from visible plastic to below 100 µm, which is about 1,000 times smaller than a millimeter.

In addition to identifying the origins of microplastics, it’s necessary to investigate their impact on the marine eco-system, and in particular the effect on the food-chain. It’s known that microplastics concentrate organic pollutants such as pesticides. The fear is that they are consumed by marine organisms and passed up the food chain to our dinner tables. Chromatography and mass spectroscopy tools allow measurement and identification of the pollutants. Other issues such as how microplastics affect reproduction, growth, immune response and genetic traits of bio-organisms in the food-chain are important questions. Such research demands cellular imaging and assay technologies, gene sequencing and proteomic tools.

A case in point is the Rhine Water Project, led by Andreas Fath, Ph.D. A professor at Furtwangen University in Schwarzwald, Germany. Fath worked with PerkinElmer to analyze water samples he collected from the Rhine River, earning him the nickname of “the swimming professor.” In compiling a list of essential instruments in his research, Fath named the Spotlight 200 FT-IR Imaging System as among his seven essential lab instruments.

Similar research using PerkinElmer’s FT-IR instruments is also underway at Munich-based One Earth One Ocean. The non-profit organization is dedicated to cleaning up the coasts, oceans, lakes, and streams from plastic debris and other harmful waste. In pursuit of its mission, the One Earth One Ocean research team is measuring water samples right on board its research vessel using the PerkinElmer Spectrum Two spectrometer.

“These are just two of the many examples of our FT-IR technology at work in helping to identify the types and origins of microplastics in the world’s waterways,” says Robert Packer, Portfolio Director of IR at PerkinElmer, who adds that the company’s ongoing innovation in microplastics analysis is just another example of the company’s ongoing commitment to innovating for a healthier world.