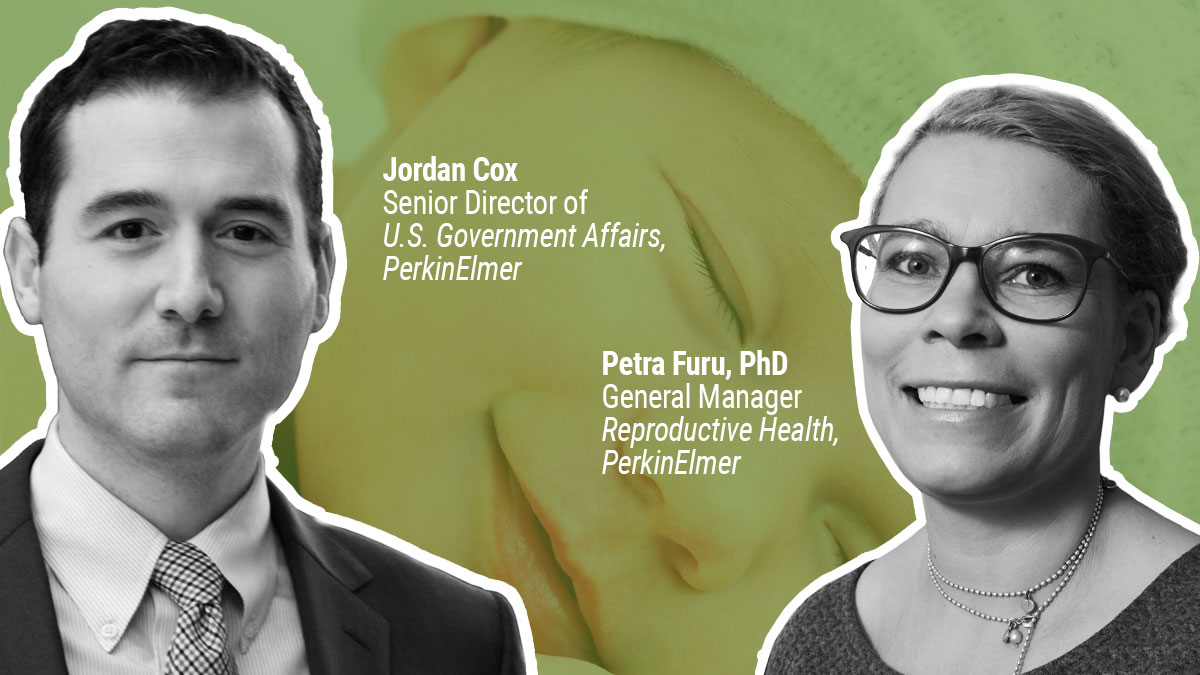 The State of Newborn Screening in the United States

December 9, 2022
Click Here to View All Blogs About Newborn Screening

According to data from the National Institute of Child Health and Human Development, more than 4 million babies are tested each year in state-led newborn screening (NBS) programs for a range of rare diseases and other inherited disorders. In some cases, the conditions these programs screen for can be life-threatening, which means earlier diagnoses and interventions are critical.

Most recently, we were honored to announce that EONIS™ SCID-SMA Kit has received marketing authorization from the U.S. FDA and is now the first authorized assay for spinal muscular atrophy (SMA) screening in newborns.

In this blog post, Senior Director of U.S. Government Affairs Jordan Cox discusses this and other recent developments in the newborn screening landscape with Petra Furu, PhD, PerkinElmer’s general manager for reproductive health.

Jordan: Petra, can you begin by giving our readers some context and describe how newborn screening programs work? Also, what are a few of the fundamental elements that help NBS programs be effective?

Petra: Yes, of course. When a baby is born in a traditional hospital setting, a healthcare professional will administer a simple heel prick to collect a blood spot sample. This typically occurs 24 to 48 hours after birth. The dried blood spot (DBS) card is then shipped to a lab where it can be punched into smaller specimen samples to undergo various sample prep processes to ultimately be processed by different laboratory technologies at a specialized newborn screening laboratory.

Screening results are typically delivered in a few days, but this can vary depending on a number of factors. It’s also worth noting that initial screening results may only indicate the possibility of a rare disorder – not confirm a diagnosis. In those cases, a specialist will contact a family for additional testing and/or examination.

Time is of the essence when it comes to running a successful NBS program. Many rare diseases are progressive, so when they go undetected for days, weeks, or even months and years, the health of the child can diminish. Other conditions and congenital disorders may not present symptoms until later in their development, which again underscores the importance of a timely diagnosis. Fortunately, if caught early enough, many conditions have relatively uncomplicated treatments and can be effectively managed.

Jordan: What are some of the more common rare diseases and congenital disorders that NBS tests help detect?

Petra: As you and many of our readers may know, NBS programs are required by law in all 50 U.S. states, the District of Columbia and Puerto Rico. The Recommended Universal Screening Panel (RUSP) – a list of primary and secondary disorders that all newborns should be screened for – was established in 2002 by the Department of Health and Human Services (HHS) to guide each of these individually led programs.

Today, the RUSP includes SMA, severe combined immunodeficiencies (SCID), cystic fibrosis, congenital hypothyroidism and phenylketonuria (PKU), to name a few. As science evolves and with continued innovation in the detection and treatment of congenital diseases, groups of researchers, physicians and patient advocacy organizations petition to add new disorders to the RUSP.

Earlier this year, Parent Project Muscular Dystrophy submitted its newest nomination package to add Duchenne muscular dystrophy (DMD) to the list. A core component of this submission was the completion of a large pilot study in October 2021 to help demonstrate the efficacy of testing newborns for DMD, which PerkinElmer proudly helped support (more info on PPMD website here).

Jordan: What are some other recent collaborations or initiatives that our colleagues are involved in to expand NBS globally?

Petra: I am proud, yet humbled, by the many ways in which our team is helping improve and advance NBS worldwide. In October, as part of our latest commitment to expanding sickle cell disease (SCD) screening across Sub-Saharan Africa, PerkinElmer made a donation to Ghana Health Services to build screening capacity for an additional 50,000 babies annually. This works toward that country’s goal to increase SCD screening from its current 4 percent of all babies born in the country to 50 percent by 2030. Earlier this year, our team also announced a collaboration with the Novartis Sickle Cell Program and continues to support the work of the American Society of Hematology (ASH) and its Consortium on Newborn Screening in Africa.

As the global leader in neonatal screening, our team also has the unique opportunity to connect stakeholders across the NBS landscape to learn from one another and exchange best practices. One very meaningful way we did this in 2022 was by hosting the PerkinElmer NBS World View Summit. This three-day international conference convened health care practitioners, patient advocates and other thought leaders in person and virtually to learn from and share with one another. Attendees also heard the emotional and impactful story from one mother of a child with GAMP about the importance of NBS (watch here on Vimeo).

Jordan: Why is it important that governments take action to create, support, and expand newborn screening programs?

Petra: Governments should do everything in their power to help establish systems and provide resources that safeguard the health and well-being of those they govern. Newborn screening services are undoubtedly included in that. We highlighted this very thing in a visit with Chair of the House Appropriations Committee Rosa DeLauro at our Shelton, CT facility in October.

As you know well, Jordan, each U.S. state is responsible for operating its own NBS program, but the federal government plays an essential role in supporting each of them with funding and by establishing nationwide standards and guidelines. One important piece of legislation being considered in Congress is the Newborn Screening Saves Lives Reauthorization Act which would ensure that additional funding would go towards efforts that improve the accuracy of screening tests, develop tests for new conditions and support research to advance newborn screening science.

Petra: In the last several years, we have seen significant technological advances and increasing public support for whole genome sequencing (WGS) in NBS. Worldwide pilot projects are adding to a growing body of evidence showing how high-throughput, cost-effective WGS can exhaustively detect disorders in newborns at an early stage. Still, many questions remain on the cost, accessibility and ethics of WGS deployed at scale in NBS, and so we can expect that to be an ongoing dialogue.

Another opportunity and area of improvement to watch is how society addresses “maternity care deserts,” or regions where there is a significant lack of healthcare facilities offering obstetric care. A recently published report from the March of Dimes found that there was an increase in the number of U.S. counties where there is a lack of maternity care resources, which affects as many as 6.9 million women and almost 500,000 births across the country. In this and other efforts, however, the public sector response is just one piece of the puzzle. It is the collaboration between elected officials, NGOs, academia, the private sector and other vested parties that will ultimately bring about the most impactful innovation and improvements in NBS.