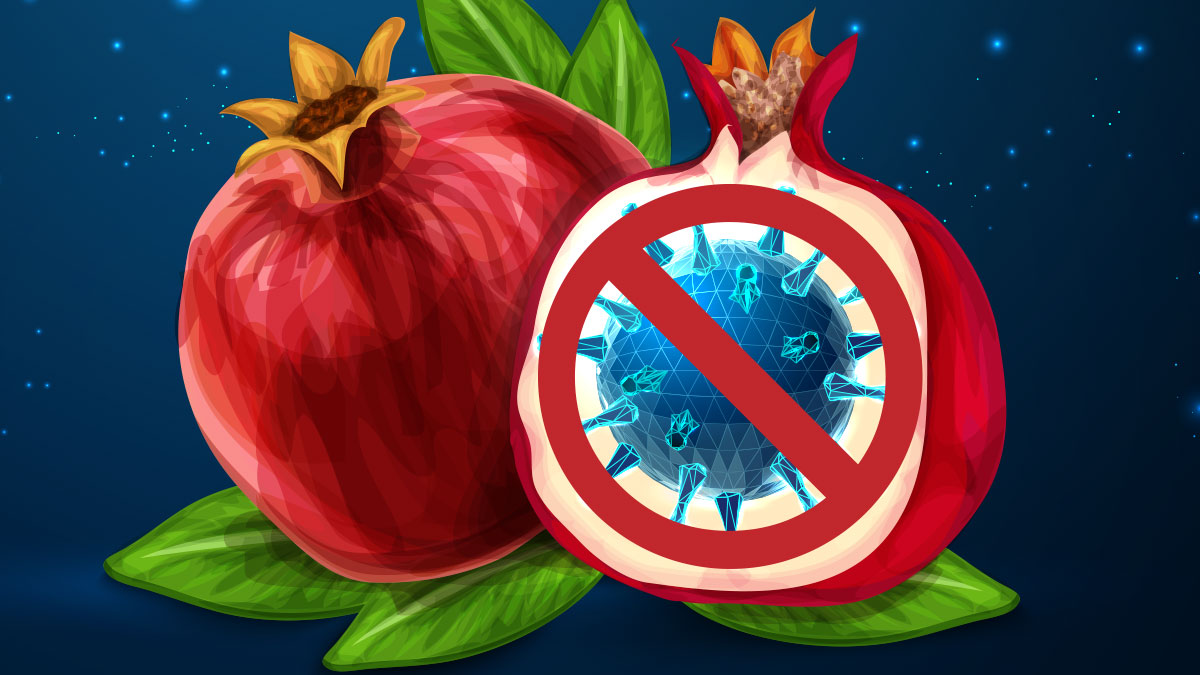 October 26, 2021
Click Here to View All Blogs About Drug Discovery

Since the World Health Organization (WHO) declared the novel coronavirus (COVID-19) outbreak a global pandemic on March 11, 2020, researchers around the world have been working tirelessly to discover effective preventive treatments and therapeutic agents.

Currently, the FDA has only approved one drug, Veklury (remdesivir), for treatment of COVID-19. However, the antiviral is only recommended for adults and certain pediatric patients who are sick enough to need hospitalization. This means that therapeutic agents that either fight or halt the spread of SARS-CoV-2 are still urgently needed.

For centuries, humans have used plant extracts for medicinal and beneficial health purposes and there are numerous examples of the use of plant-derived compounds as drugs, nutraceuticals, and cosmetic ingredients.

In a recent study,1 Italian researchers investigated the role of pomegranate peel extract as a natural remedy to enhance protection against SARS-CoV-2 infection. The team found that an extract found in pomegranate peel was able to inhibit the binding between the SARS-CoV-2 Spike glycoprotein and the human angiotensin-converting enzyme 2 (ACE2) receptor in vitro, suggesting the extract could help prevent SARS-CoV-2 entry into host cells.

Pomegranate fruits are rich in polyphenols, which are the largest and the most widely distributed group of bioactive compounds in the plant kingdom. Several studies have demonstrated the antiviral potential of certain classes of polyphenols against Epstein-Barr virus,2 herpes simplex virus (HSV),3 and other viruses causing respiratory tract-related infections.4

Previous research suggests that pomegranate peel extracts (PPEs) may have protective activity against degenerative chronic diseases, such as some types of cancer, type 2 diabetes, atherosclerosis, and cardiovascular diseases.5 Studies have also explored the antiviral and antibacterial activity of these compounds on influenza6 and herpes virus replication.7

With this in mind, Annalisa Tito, from Arterra Bioscience SPA, and colleagues from the Italian National Research Council, Telethon Institute of Genetics and Medicine, the University of Naples Federico II, and Vitalab Srl explored whether PPEs could be employed as antiviral agents against SARS-CoV-2.

The researchers first conducted a binding inhibitor assay to investigate Spike-ACE2 binding in the presence of PPEs at three concentrations (ranging from 0.04 mg/mL to 1 mg/mL) compared with a positive control (antibody inhibitor AC384). The reaction was measured with an ABTS assay at 450 nm using the VICTOR® Nivo™ multimode microplate reader. Analysis revealed that PPE inhibited the interaction between Spike and ACE2 by up to 74% in a dose-dependent manner. Further investigation revealed that the compound punicalagin (PC) had the greatest inhibitory effect at 49%, followed by ellagic acid (EA) which exerted 36% inhibition.

Microscale thermophoresis (MST) experiments were then conducted to investigate the binding capacity and chemical interactions between the extract and Spike and ACE2. The results showed the PPEs bound both proteins, and that the interaction with Spike was 10-fold stronger than with ACE2.

These data prompted the researchers to investigate whether PPE could inhibit the interaction between Spike and ACE2 in a cellular model. Human kidney-2 cells (HK-2) were plated in CellCarrier™-96 plates and incubated with either 0.04 mg/mL of PPE extract or water for 4 hours. Cells were then infected with SARS-CoV-2 Spike-pseudotyped lentivirus or a control vesicular stomatitis virus G (VSVG). Both viruses carried the green fluorescent protein (GFP) gene in their RNA genome, which was expressed and detected in the cells upon infection. The cells were imaged using the Operetta® High-Content Imaging System.

After 72 hours, lentivirus infection was almost completely abolished by PPE, as demonstrated by the number of GFP cells counted. In contrast, when the cells were infected by the lentivirus carrying VSVG protein, the percentage of infected cells was only reduced by 18%, suggesting a specific inhibitory effect of PPE toward Spike-ACE2 binding. Interestingly, gene expression analysis revealed that PPE not only inhibits Spike-ACE2 binding, but also downregulates the expression of ACE2 and the host protease TMPRSS2 by 30% and 70%, respectively.

In the final step of their experiment, the team measured the activity of one of the main proteins involved in virus replication, 3CL protease, in the presence of PPE. Using the VICTOR Nivo multimode microplate reader for fluorescence measurements, the researchers found that PPE was able to inhibit the activity of the 3CL protease by up to 80% when used at 0.2 mg/mL. This suggests that PPE might have multiple biological roles in reducing the chance of the virus anchoring to the cell and being internalized.

Writing in Frontiers in Chemistry, the authors conclude: “The study here presented paves the way for longer and in depth-investigations on the activity of pomegranate peel polyphenols in preventing SARS-CoV-2 infection in vivo and it may also promote new ideas on how to reuse an agroindustry byproduct for valuable and healthy applications.”

The VICTOR Nivo multimode plate reader with stacker can set up walkaway automation – increasing the overall efficiency of your lab and accelerating your next drug discovery. The instrument can be digitally controlled and monitored remotely, allowing for true walkaway experiments.

For research use only. Not for use in diagnostic procedures.