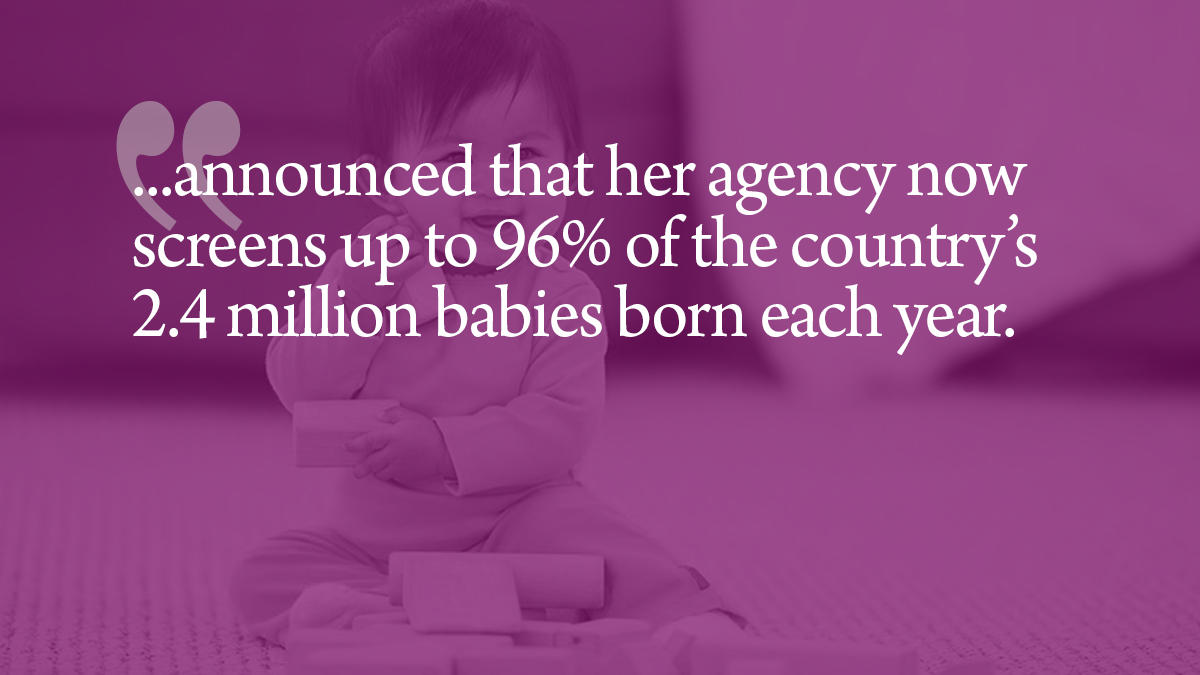 Newborn Screening Celebrates A Milestone In The Philippines

Dr. Maria Melanie Liberty B. Alcausin is not one to languish on her laurels.

The director of the Newborn Screening Reference Center (NBRC) in the Philippines, Dr. Alcausin announced that her agency now screens up to 96% of the country’s 2.4 million babies born each year. Considering that many of those babies are born at home in areas of the archipelago that can only be reached easily by air that number is very good, Dr. Alcausin says. The fact is, she is far too modest.

Only 20 years ago the Philippines had no newborn screening services (NBS) beyond a pilot program based in Manila.

Thanks in part to federal legislation, ongoing help from PerkinElmer, a global leader in newborn screening, and the dedication of Dr. Alcausin and thousands more Filipinos affiliated with the NBRC, the country now boasts some 6,000 blood-spot collection centers. The blood-spot tests are then sent to one of five regional testing centers, where they are analyzed for six different metabolic disorders, including Congenital Hypothyroidism (CH), Congenital Adrenal Hyperplasia (CAH), Galactosemia (GAL), Phenylketonuria (PKU), Glucose-6-Phosphate-Dehydrogenase Deficiency (G6PD Def.), and Maple Syrup Urine Disease (MSUD).1

For a developing country such as the Philippines, these accomplishments within a 20-year span are nothing short of remarkable.

While Dr. Alcausin and her staff are proud of what has been done so far, they are also leveraging the 20th anniversary of the NBRC with even more ambitious goals. Again with the approval of the federal government and help from companies like PerkinElmer, the NBRC is expanding its technical assistance, evaluation, and training to clinical technicians, midwives, and genetic counselors in order to reach out to the families of the other remaining newborns each year so that they can also be tested for inherited disorders.

“Our goal is to reach every Filippo child,” Dr. Alcausin says.

Dr. Alcausin and her team also won government approval to expand the number of genetic tests offered from 6 to 24. Because they had little in the way of financial support in making their case for expansion, the NBRC worked in partnership with counterparts in California, where there is a significant Filipino population and no shortage of data to back up test outcomes.

The result? “We were able to demonstrate the value of adding additional screens based on the California data and the impact of the added screens on Filipinos,” Dr. Alcausin says. In fact, within six months of their addition, the new tests have uncovered more than 50 Filipino newborns with metabolic disorders that would otherwise have gone undetected.2

Looking beyond the 20th anniversary of newborn screening in the Philippines, Dr. Alcausin is realistic about the challenges ahead for the program’s expansion. Tight funding, the need for additional expertise, and a better infrastructure for the archipelago nation always loom large.

With the continued support of companies like PerkinElmer, which offers a full complement of newborn screening services and diagnostic tools and expertise, emerging countries such as the Philippines can rest assured it can always rely on a company that has been committed to innovating for a healthier world for more than 80 years.