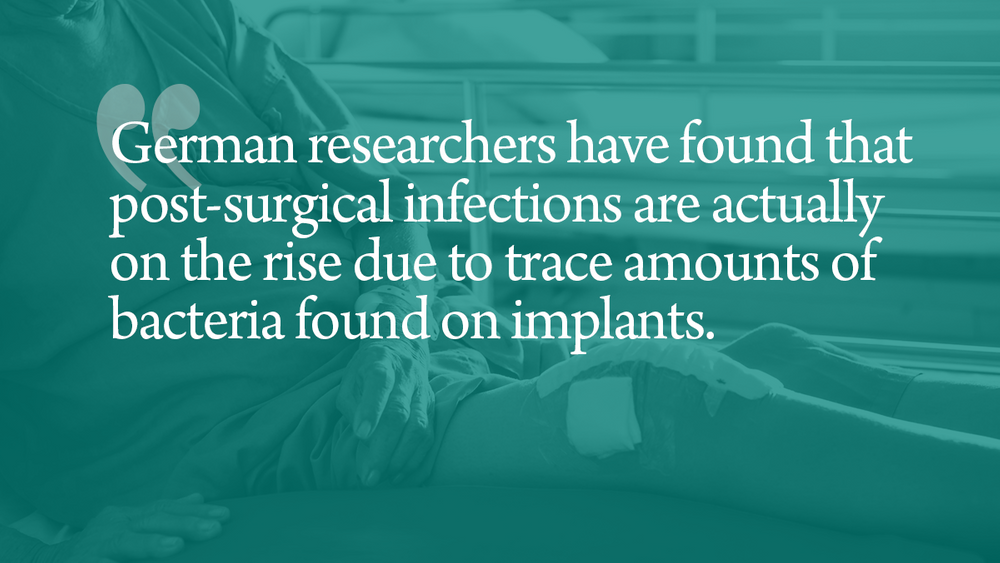 Staph Infections Are On The Rise

Most of us know someone with an about orthopedic implant. News of hip, knee, and even elbow replacements are common. But these are just a few of the more than two dozen orthopedic implants now available to replace or support bones ravaged by time, injuries, trauma, or disease. Over three million orthopedic procedures are performed every year to improve and sometimes even save the lives of patients around the world.1

Unfortunately, not all of the outcomes have fairytale endings. German researchers have found that post-surgical infections are actually on the rise due to trace amounts of bacteria found on implants.2 Not only is fighting those infections costly, now totaling over $9 billion a year, but they are especially bad for patients with bone cancer, says Dr. Nick Bernthal, Chief, Division of Musculoskeletal Oncology Director, UCLA Global Orthopedic Initiative, Department of Orthopedic Surgery, David Geffen School of Medicine at UCLA. “Patients with bone tumors have a high risk of Staphylococcus aureus, or staph bacterial infections,” he says. “If their implant becomes infected, they have a high risk of losing a limb and possibly their lives.”3

In an effort to aid in the development of more effective treatments for post-surgical infections in his orthopedic patients, Bernthal and his colleagues have been working to develop an in vivo model to track staph joint-replacement infections in live mice using optical (bioluminescence or fluorescence) imaging. To do so, Dr. Bernthal and his team inoculate an implant with bacteria that have been genetically engineered to emit bioluminescent light, and implant the device into a mouse. Using a PerkinElmer IVIS® Spectrum Imaging System, optical 3D tomography of both the bioluminescent signal that results from the infection as well as a fluorescent signal produced by the host immune response can be monitored in real time.

According to Jason Lee, Ph.D., Director of the Preclinical Imaging Technology Center at the Crump Institute for Molecular Imaging at the David Geffen School of Medicine and colleague of Benthal, the IVIS® Spectrum provides optical bioluminescence “that is highly sensitive, quick, and relatively inexpensive to locate tumors and track their growth,” he says, adding that the technology is indispensable in gaining a better understanding of biology.4

Bernthal also notes that microCT imaging systems, in this instance the PerkinElmer QuantumTM GX, produce detailed images that help verify biofilm formation on metallic implants. “These are really beautiful images that have helped us to understand the phenomenon,” he says, adding that the images show staph-infected as well as uninfected bone. That is important in selecting the right course of post-surgical treatment. “Using histology alone, you would miss the fact that the immune system has equivalent results to drugs over a 21-day period,” Bernthal notes. More significantly, some patients receiving antibiotics that mask infection will exhibit it after 35 days, meaning that the implant needs to be removed. To avoid that dire prospect, particularly in bone cancer patients, the researchers are designing new implant coatings and microbial treatments to better resist infections in the first place.

“Some experiments are also underway to “see” bacteria and replace only what is infected using biofluorescent probes,” Bernthal says. Eventually, both Bernthal and Lee envision noninvasive technologies such as optical imagingand positron emission tomography (PET) becoming commonplace in clinical environments everywhere. “Such imaging covers the spectrum of the human equation, from anatomical imaging to molecular imaging,” Lee says. Bernthal, meanwhile, believes these new imaging tools may help researchers to develop a new level of translational medicine that models treatments for each individual patient in a real-time clinical environment.

For research use only.  Not for use in diagnostic procedures.