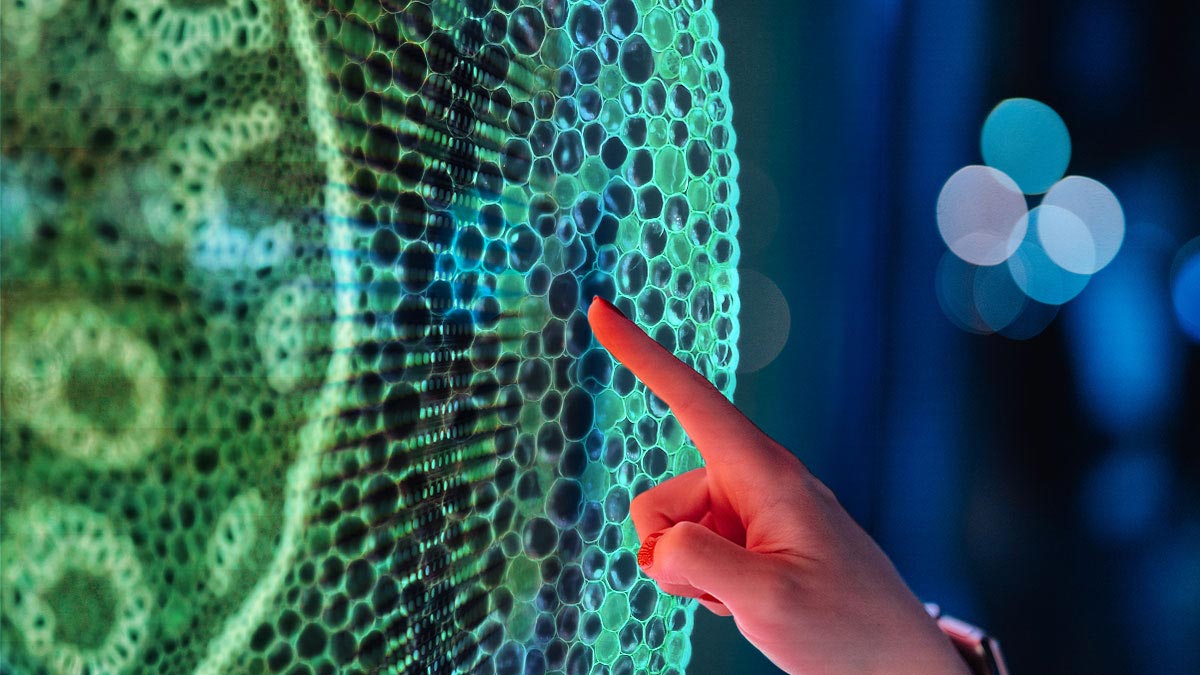 April 28, 2022
Click Here to View All Blogs About Lab Support and Services

Detection of cell death is one of the most recognized flow cytometry applications. Combined with various death detection dyes, flow cytometry can be used to determine if cells are undergoing death processes. Although it is already informative to know if a cell is dying or has been dead, revealing details in cell death processes might also be valuable. As the first part of this series, we go through the pathways, terminology, and cell death mechanisms to become familiarized with the markers used in flow cytometry. 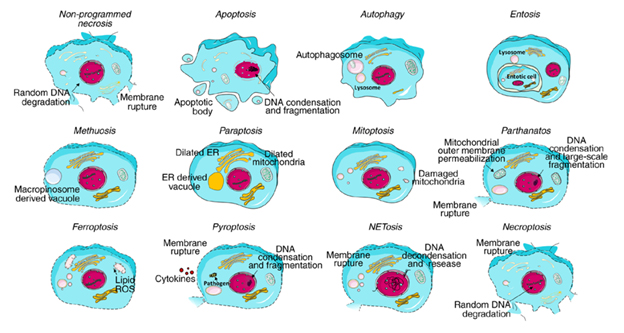 It is important to note that there are many more details behind the morphological alternation of the dying cells. Keep in mind that there are ten cell death modalities (apoptosis, autophagy, entosis, methuosis, paraptosis, mitoptosis, parthanatos, ferroptosis, pyroptosis, and necroptosis) and some of the markers and pathways you see in this diagram below (see figure 2) can be detected using flow cytometry.

It’s essential to keep in mind that many assays, such as membrane permeability assay with PI or 7AAD, and membrane asymmetry assay with Annexin V, are used to detect morphological alternations of cells, while a lot of morphological alternations are common for various cell death processes originally defined with molecular pathways. Therefore you can expect to see the permeability assay or asymmetry assay appear again and again in detecting various cell death processes; those are performed to confirm already known cell death pathways, but not to determine the type of cell death. On the other hand, we also introduce the highly specific markers of various cell death types in this series, including Caspase-3 of apoptosis, LC3-II of autophagy, transferrin of ferroptosis, etc.

There is always room for adding live/dead staining to your flow cytometric panel.

Scientific Service Specialists recommend adding live/dead staining on top of every flow cytometric panel. Dead cells, generally with comprised membrane structure, are “sticky” because of the exposure of nucleic acid contents, leading to non-specific binding of antibodies, relatively lower stain index, and even false positive readouts. That is why it is optimal to include live/dead staining.

Despite the tremendous numbers of live/dead staining, there is no significant difference in their basic working mechanisms. Live cells are usually intact and maintain their membrane integrity, hence can exclude dyes to stain either free amines in the cytoplasm or nucleic acids; on the contrary, the comprised membrane of dead cells is permeable to those dyes, allowing the binding of fluorescent probes to dead cells. Thus, it is named dead cell exclusion. Please note that nucleic acid binding dyes can ONLY be used to discriminate live/dead cells in fresh cell suspension since those dyes can be released from previously existing dead cells during fixation and permeabilization and bind to other cells. Amine-reactive dyes are fixable, meaning those dyes will be fixed simultaneously with cells so that the live/dead discrimination is not influenced by fixation and permeabilization.

The table below summarizes the most popular live/dead staining products. 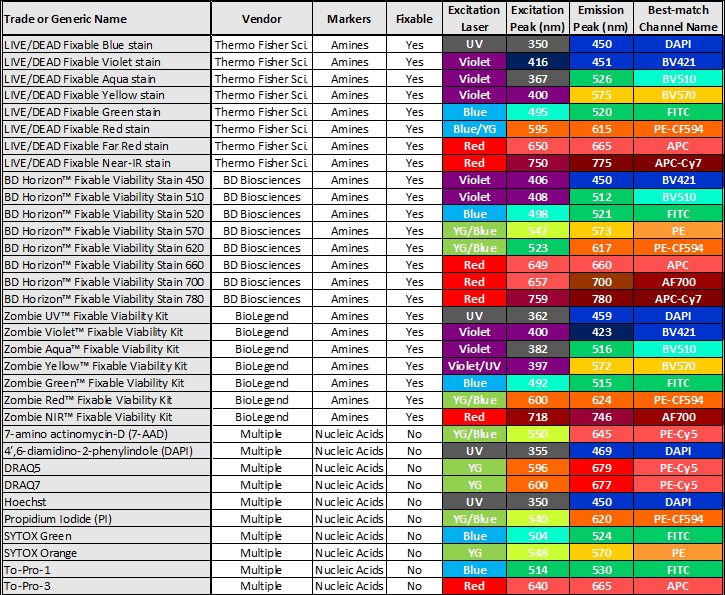 As you can see in the table above, we have identified trade or generic names, vendors, and other technical specifications. Their excitation laser (color), excitation and emission peaks, and best-match channel names are color-coded. Please note that the supermajority of fluorescence channels on commonly used cytometers are named after the conjugated dyes of antibodies but not live/dead dyes. Therefore we can only describe those channels that are the “best-match” to the listed live/dead staining.

Some nucleic acid dyes, such as Hoechst and DRAQ5 you see listed above, can penetrate intact cell membrane at high concentration levels. Therefore, the final concentration shall be optimized when they are chosen for dead cell exclusion assay.

We hope the first part of this series gives you a deeper understanding of cell death mechanisms so you will be more familiar with the markers used in flow cytometry.