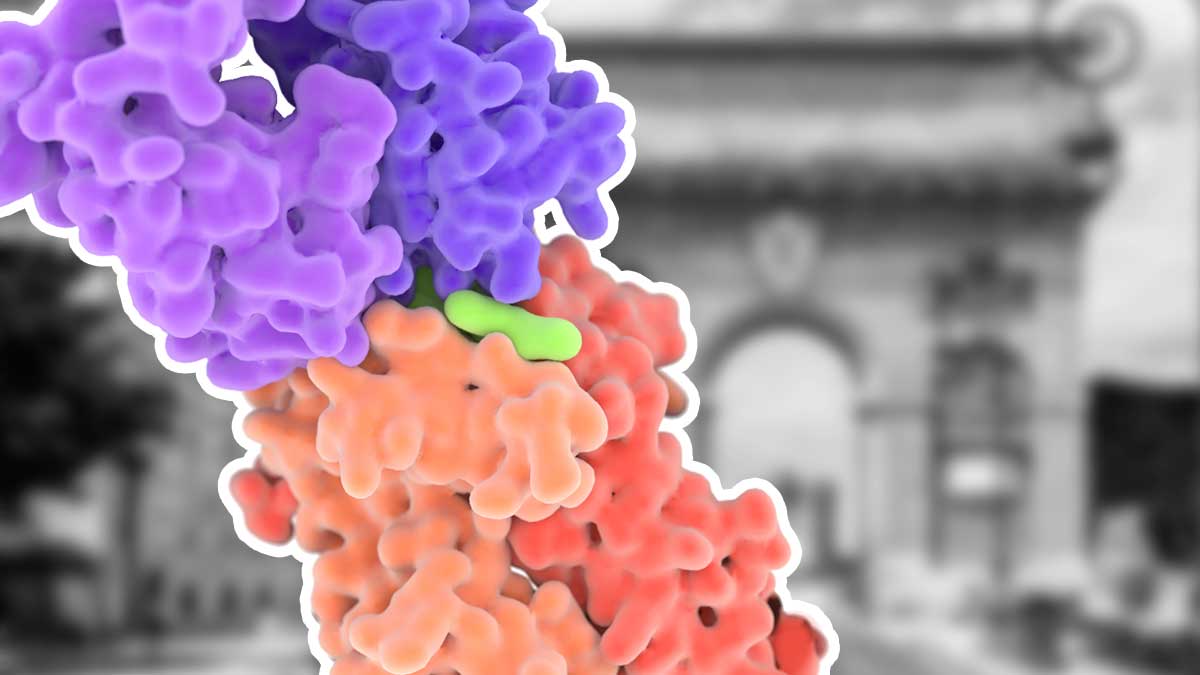 Allosteric Modulators of GPCRs: A Promising Approach for Drug Discovery

December 3, 2021
Click Here to View All Blogs About Drug Discovery

G-protein coupled receptors (GPCRs) are the largest and most diverse family of membrane receptors in the human genome and are targeted by around one third of drugs currently approved by the FDA. These proteins represent one of the most extensively studied targets for drug discovery, mainly due to their involvement in a plethora of signaling pathways and pathophysiological processes in the human body.

The majority of GPCR-targeted drugs are designed to bind to the primary active site – or the orthosteric site – of the receptor, which is responsible for the binding of endogenous GCPR ligands. These drugs act by either inhibiting (antagonists) or activating (agonists) the receptor, thereby inducing the desired therapeutic effect. This approach has been extensively studied and its effectiveness is evident due to the large number of drugs on the market.

In recent years, we have seen advances in the discovery of novel ligands that act on secondary binding sites on GPCRs, known as allosteric sites, rather than the main orthosteric site. Ligand binding at these sites can induce conformational modifications in the receptor. Such modifications can lead to increases or decreases of the orthosteric ligand binding and/or signal strength, which indirectly affect the receptor’s biological activity.

Small molecules that bind to allosteric sites and enhance responses to GPCR agonists are known as positive allosteric modulators (PAMS), while those that inhibit the response are known as negative allosteric modulators (NAMS). These modulators often provide higher selectivity for individual GPCR subtypes than traditional orthosteric site ligands. They also offer the potential for fine tuning normal signaling because the endogenous agonist is still able to bind to the receptor.

Exploring the Role of Allosteric Modulators In mGlu Activation

Although much is understood about the binding mode of allosteric modulators, less is known about how these molecules allosterically control agonist affinity or efficacy, or how they exert partial agonist activity or biased effect. It has been suggested that PAMs might act by stabilizing a specific conformation of the GPCR. Another viewpoint is that they act by influencing the equilibrium between pre-existing GPCR conformational states. 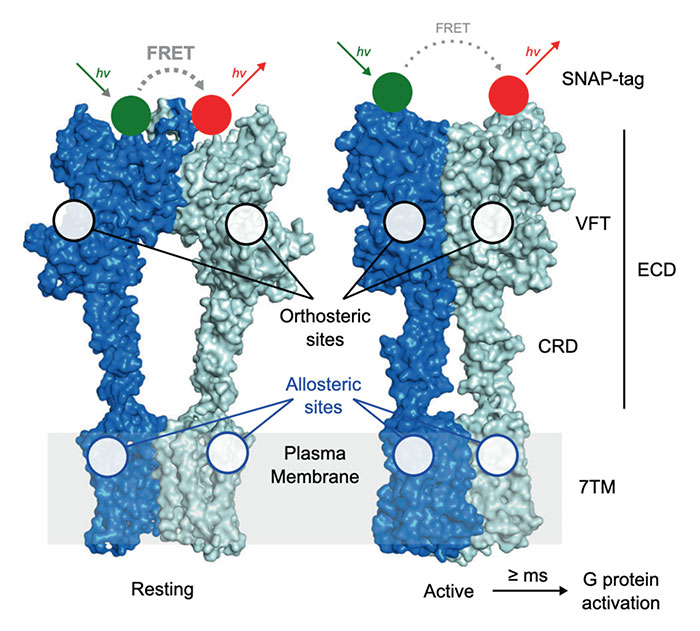 Structures of dimeric mGlu2 in resting and active conformations. The major structural elements of each subunit include the extracellular domain (ECD, comprising the Venus fly-trap domain (VFT) and the cysteine-rich domain (CRD)) and the seven-transmembrane domain (7TM). Orthosteric ligand binding sites are found in the cleft between the upper and lower lobes (black circles) of the VFT and the majority of allosteric modulators bind to sites in the 7TM (blue circles).

Activation leads to a closure of the VFTs and a reorientation of the ECDs, the CRDs, and the 7TMs bringing the two subunits into closer proximity. In N-terminally SNAP-tag labeled receptor dimers this leads to a transition from a high FRET/resting to a low FRET/ active state. G protein activation through interactions with the cytoplasmic side of the 7TM is reported to occur at >10 ms timescales. The shown structures were generated using PDB ID 7EPA and 7E9G. Figure reprinted from Cao A et al.1

Using this approach, the researchers showed that mGlu2 oscillates between inactive and active states at sub-millisecond timescales in the absence of ligand, and that L-glutamate (Glu), the major excitatory neurotransmitter in the CNS, partially increased the number of receptors residing in the active state. Interestingly, only in the presence of BINA, a mGlu2 specific PAM, did they observe the full population of receptors being stabilized in an active conformation (Figure 2). A similar effect was also seen with the nucleotide-free Gi heterotrimeric protein.

Data represent the stacked means ± SD from three independent biological replicates for each state with error bars centered around the mean for the VLF, LF, HF, and VHF from top to bottom, respectively. Figure reprinted from Cao A et al.1

Writing in Nature Communications, the authors say: “The quantification of sub-millisecond structural dynamics of soluble, functional, full-length mGlu2 receptors sheds light on the mechanism of action of a synthetic mGlu2 PAM and the stabilizing effect of the Gi protein.”

The team concludes that future studies will pave the way for a deeper understanding of how the structural dynamics of mGlu receptors, as well as other membrane receptors, regulate their function and may open up alternative routes for the development of fine-tuned therapeutics.

Looking to streamline and further your GPCR research? Explore the specific reagents and tools used by the Institut de Génomique Fonctionnelle at the Université de Montpellier to accomplish their findings, in addition to a comprehensive portfolio of high-technology GPCR solutions and educational content.